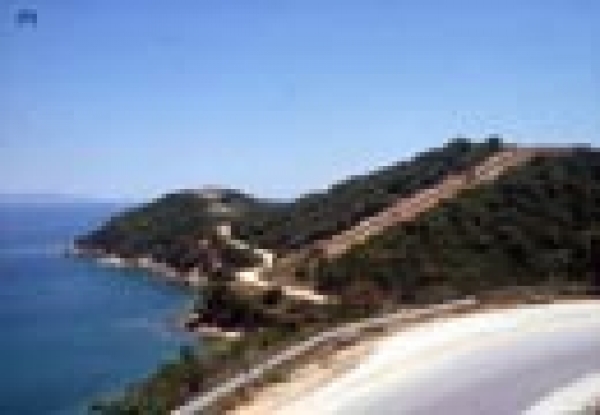 Ancient Stagira, homeland of Aristotle, the greatest philosopher of antiquity, teacher of Alexander the Great, are located roughly 500 meters to the southeast from the village Olympiada, above a small, mountainous peninsula, which is called “Liotopi”. Founded by colonists from Andros around 655BC on the eastern neck of Halkidiki, they were soon reached by colonists from Chalcis. Ancient sources offer us with an accurate reference for the location of the city: they place Stagira south of Akanthos and on a coastal place and add the existence of a small isled opposite the city, called “Kapros” [the same name was also attributed to the port of the city and many of the coins of the city had a wild boar (=kapros in Greek) as a symbol]. Tradition holds it that the people of Stagira moved and buried Aristotle’s relics in their city and honor his memory with a great festival “Aristoteleia”. After the Persian wars Stagira participated in the First Delian League contributing to the common fund a relatively small tax. However during the Peloponnesian War the city defected from the Athenians in 424BC and allied with the Spartans, surrendering to Brasidas. This enraged the Athenians who send Cleon to restore the city to the Athenian sphere of influence. However the Stagireans were successful in fending off Cleon and the city maintained its independence. Later Stagira was incorporated to the Chalkidian League, the federation of cities in Chalkidiki with Olyntus as its capital. In the Olynthian War (349BC) Stagira were besieged by Philipp II and destroyed, but were rebuilt by him being the birthplace of Aristotle (Herodotus, 7,115. Thucydides 4,88,2. Stabo 7,331. Plutarch, Alexander 7,3). Despite the city’s reconstruction, its destruction by Philipp was the beginning of its decline.

Tweet
Published in East Coast
More in this category: « Aristotle Monastery Of Zygos »
back to top
s

This email address is being protected from spambots. You need JavaScript enabled to view it.